This year, it isn’t just a FARS banquet – we are co-sponsoring the event. Come on out and enjoy the evening! Just be sure to bring cash for the raffle, as the ATM was recently removed.

Presentation Title:  The Pre-Silicon History of Radio in Santa Clara Valley and the Peninsula

About the Speaker:  Mike Adams has been a radio personality and a film maker.  Currently he is professor emeritus of radio, television, and film at San Jose State University, where he has been a department chair and the Associate Dean of the College of Humanities and the Arts. Adams has taught at the Shanghai Theatre Academy School of Television and Film.  As a researcher and writer of broadcast and early technology history, he created two award-winning documentaries for PBS, the Emmy-nominated “Radio Collector,” and “Broadcasting’s Forgotten Father.”  Mike is the Board Chair of the California Historical Radio Society, CHRS.  For his service to historical radio research and publication he received the AWA (Antique Wireless Association) Houck Award, the SCARS (Southern California Historical Radio Society) President’s Award, the TCA (Tube Collectors of America) Stokes Award, the RCA (Radio Club of America) Ralph Batcher Award, and he was named a CHRS History Fellow.  He has had published numerous articles and six books, including Lee de Forest, King of Radio, Television and Film, 2012, Springer Science, The Radio Boys and Girls: Radio, Telegraph, Telephone and Wireless Adventures for Juvenile Readers, 1890-1945, McFarland Press, 2015, and Columbus Radio, Arcadia, 2016.

CQ CQ! It’s time for another meeting. This Wednesday evening, in addition to the regular agenda of interesting items, we’ll have a brief discussion over our outings schedule, as well as the pros and cons of:

In an attempt to continue bringing ideas out from within the club, our “guest speaker” Bobby Barnett (K0XI) will talk about Amateur Radio Direction Finding (ARDF), who does it, why, and how contests are organized. The evening will end with an assembly project where everyone will get to make an ARDF yagi for 2m (http://theleggios.net/wb2hol/projects/rdf/tape_bm.htm). There will be enough parts for about 10 antennas, so work in teams. It should take about 30 minutes, and the only homework I’ll give is to solder the feedpoint and hairpin on at your leisure. See you there! 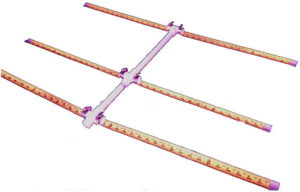 Don’t forget about our meeting this month. The Field Day high has worn off, and it’s time to get back to our rigs. This month, we have two speakers. We’ll also meet at Dish-n-Dash at 6pm on 1st and Trimble.

George Williams will talk to us about the NCDXC Elmer project (http://www.ncdxc.org/pages/elmer.html), what it is, and how it could help (or be helped) by each of you. With the new faces that have joined in recently, we should be reminded to take the time to give back to the hobby some of what we have gotten out of it.

Victor Bubbett will talk to us about how Coe State Park uses amateur radio for some of their activities. You may recall Steve Stearns’ talk on VHF propagation and the use of Radio Mobile for link planning. The example he was using was his planning for a Coe State Park event. Victor is a uniformed volunteer for the park, and pretty much drives all the amateur radio events, including the Backpackers Weekend, Hunting Hollow Run Run, and others. He enlists the aid of people like Steve to make these events successful, organizes them, and makes sure the event has good communications in areas that don’t normally have it.

See our meeting schedule page to get started with WVARA. Meet new Hams and attend our events.